Majority of Malaysian consumers (70%) believed that the country is in a recession during the fourth quarter of 2019 (Q4 2019), down slightly from 73% posted in the previous quarter. Of the 70%, 37% were optimistic about an economic recovery in the next 12 months, compared to 34% in Q3 2019, according to The Conference Board Global Consumer Confidence Index (CCI).

Produced in collaboration with Nielsen, the CCI is driven by three indicators - consumers' perception on local job prospects, personal finances, and intentions/readiness to spend. While recessionary sentiment reduced, Malaysians continued to be cautious with their finances, with 85% of consumers saying that they have adjusted their spending habits to save on household expenses. In particular during Q4 2019, 46% of Malaysians said "now is the time to buy the things they want and need", a slight dip from 53% during the same period last year. 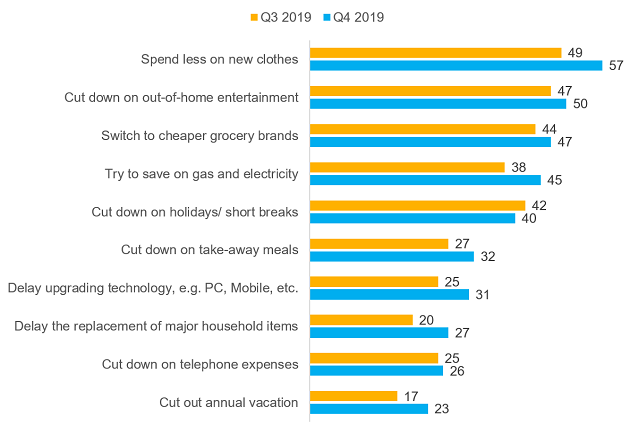 When asked what actions they are taking to save on household expenses, 57% said they will spend less on new clothes, 50% will cut down on out-of-home entertainment, while 47% will switch to cheaper grocery brands.

“Given that consumers are slightly apprehensive about spending, brands and retailers should strive to showcase value for money and appeal to Malaysians’ love for promotions. Those who do this successfully will be able to win over consumers in the current climate,” Luca De Nard, MD of Nielsen Malaysia, said. 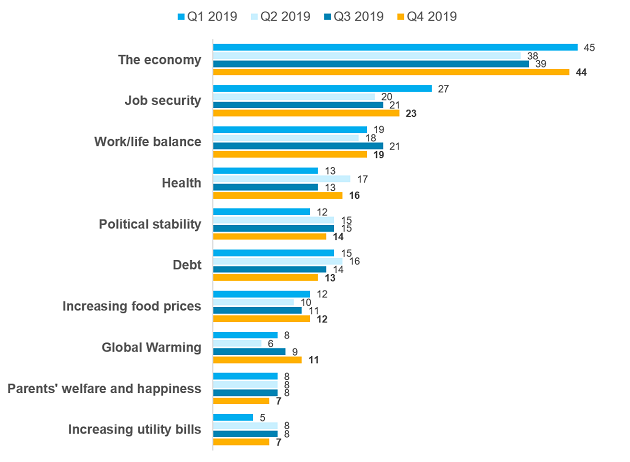 De Nard said this is the fifth consecutive quarter of decline since the all-time high index score in Q3 2018, which was recorded just after the 14th General Election.

“Since then, we have seen the score steadily decline to a level that is more realistic and sustainable in the long run. Barring any major economic or socio-political event that can adversely affect consumers’ outlook, confidence levels should remain in the positive in the coming months," he added.

Singaporeans and Thais not optimistic

While majority of Southeast Asians are optimistic about the economy, Nielsen found that Singaporeans and Thais were not. Consumer confidence scores in both countries fall below the baseline of 100, which points to overall pessimism. While Singapore consumers, generally, have not been positive about the future for the past couple of years, this is the first quarter that Thailand’s score has fallen below 100 points on the index. 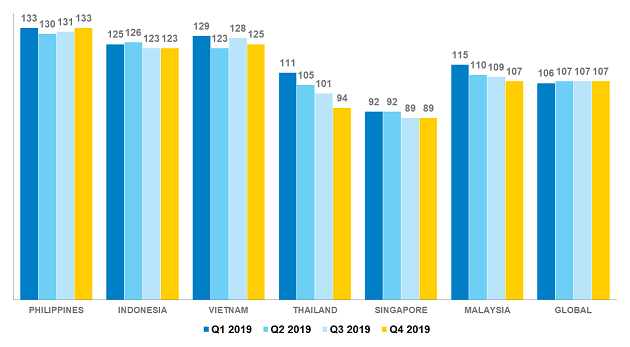 Meanwhile, consumers in the Philippines (133 points, 2nd place), Vietnam (125 points, 3rd place) and Indonesia (123 points, 4th place) ranked among the 10 most confident in the world in Q4 2019. At 107 points, Malaysia fell just outside the top 10 most optimistic countries, placing 11th on the index.

“Thailand’s confidence scores have been steadily declining over the past five quarters, due to events such as the drought and haze, as well as uncertainty surrounding the general election in the first quarter of last year,” De Nard said.

He explained that learning from this, the Malaysian government and private sector should be prepared to address extraordinary events such as the COVID-19 outbreak happening now, which will certainly impact consumer confidence and the overall economy if not contained.

SMRT promotes Jeslyn Tan to VP of media and digital

Agency of The Year & The MARKies Awards 2020 Malaysia